Mystery lovers, have I got a treat for you.

The nine stories of this season’s Mysteries To Die For podcast are coming to a book distributor near you. What makes this anthology so much fun for us mystery lovers is that, like the podcast, there is a pause before the big reveal to give you a chance to solve the murder. I’ve included the list of suspects and summarized the clues in a page called “Deliberation.” Whet your detective skills on these made to order mysteries.

Nuts! by Judi Lynn. Laurel and Nick’s first anniversary Airbnb getaway is hi-jacked by a woman dying on the kitchen floor. “Nuts!” she tells Laurel before losing consciousness.

Finding Hiawatha by Frank Zafiro. Jameson Burrish’s health had been failing but death came for him sooner than expected. With his daughter and nephew at his bedside, he gasps out his final word “Hiawatha.” Is it the rambling of a sick man or a decree to rewrite his will? The answer falls to private investigator Stefan Kopriva.

In Vino Veritas by Jack Wolff. The rag tag team of treasure hunters is within a day of finding the mythical Domas Dei temple when their guide, Den Deadson, meets a messy end. With his last breath he tells Detective-turned-bodyguard James Delviro “in vino veritas.” Now what the heck could that mean?

The Legend of El Melena by Mark Edward Langley. People are turning up dead around a small, burned down church outside Las Palmas, NM. Paranormal journalist Eddie Manning investigates to determine if the hand behind “El Melena” are human or something other.

No Luck like Bad Luck by TG Wolff. Richard Wedgeworth died in the middle of a party, his final words to his wife were “bad luck.” He ate the same food and drank the same drinks as everyone, yet he was poisoned. Solving the mystery is Diamond’s problem. Too bad she’s not for hire.

Sue Her by Kyra Jacobs. Marissa Steele is implicated in murder when the soon-to-be dead man points to her and says “Jimmy will sue her.” A former cop, Charlie Mullins pulls out all the stops to protect his best friend’s sister and the one woman he can never have.

Best Friend by KM Rockwood. A developmentally delayed young woman is hit by a truck and killed, the case closed as a tragic accident. But her last words “best friend” mean Darlene’s older brother and a volunteer social worker aren’t so quick to close the book.

The Ghost of the Paul Henry by Michael Penncavage. Men are dying aboard the Paul Henry. The only clue to their demise is the last word uttered by one of the damned. “Ghost.” Captain Saverfeld turns to Mr. Edmund Jessop and Mr. Linus Gordon to answer the question of if there is a ghostly hand behind it all.

Fading Shadow by TG Wolff. A day of the zoo becomes work for Detective Jesus De La Cruz when the maintenance manager Warren Taylor is shot. His dying word “shadow” leaves Cruz looking hard at those closest to the man.

Driver Giddy Up Derrick is trying to live up to the expectations her grandfather set. The only problem is her uncles won’t let her out from behind the reception desk. When the legendary Handbrake Hardy Frye is rumored to be on his deathbed, Giddy Up decides to make the trip to pay respects. Two eighteen year old girls, 1,800 miles, and enough ramen for a week. What could possibly go wrong?

The next story in Colin Conway’s Back Road Bobby and His Friends belongs to me. I thought about skipping this one. You know, recusing myself, and then decided nahh.

This story is has a different tone than the preceding episodes. Giddy Up and her friends Angel and Marcella deal with some grown up problems. Giddy Up isn’t given the chance to live up to her potential simply because she was born female. Angel is a domestic violence victim. First by her step-father, then by her boyfriend. Marcella is an illegal immigrant kidnapped from her family and forced into the sex trade. Real and heavy stuff. Giddy Up and Angel live dangerously by deciding to make the trek to Spokane. Along the way, they save Marcella from the men holding her.

Is this story for you? If you like darker stories, then probably not. It wouldn’t surprise me if you found Giddy Up and her friends silly. If you like dark stories with the potential of a happy ending, then yes, I think you’d enjoy the antics of three girls ready to take on the world. 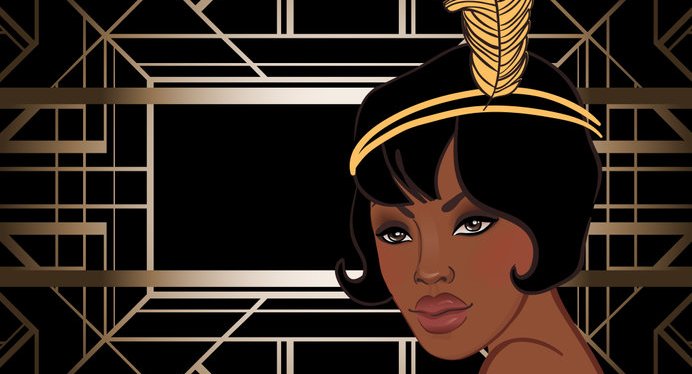 There is a lot to love in Nekesa Afia’s debut mystery Dead Dead Girls. This book is an amateur sleuth-style mystery. Our sleuth is 26-year old Louise Lovey Lloyd. A Black woman in 1920s Harlem, she works as a waitress in a café over a kinda sleezy speakeasy by day and dances her feet off in the best club in the neighborhood at night. On her way home from a late night of music and drinking, Louise and her companion Rosa Maria discover the body of a teen in the cafe’s doorway. Louise feels for the girl who reminds her of her younger self, of her younger sisters. With a spine of steel, Louise works with the New York police to go into the one place they can’t, the homes and businesses of Black New York.

Rating Dead Dead Girls on a 5-point scale against the perfect mystery, I give this 3.5 stars.

Strengths of the story. The lead character is vividly imagined and brought out on the page. You can the pride and frustration that would come with being friends with the smart and courageous woman. The setting is equally well drawn out, letting us feel the pulse of the band as Louise dances the Charleston. I simply love the language. I do not know how much research Ms. Afia did, but it was worth it. The slang is a key part of being transported to this neighborhood, at this point in time. The story is well told in the noun-verb-noun sense and is well edited, as you would expect with Berkley Prime Crime.

Where the story fell short of ideal. Ms. Afia weaves a complicated plot for her debut novel and with that intricacy comes the opportunity to make leaps in logic and leave string hanging. It is the type of story that at the end you think ‘ok, fine. That’s good.’ And then the questions start popping up. What about this and how was that managed. Beside the mystery itself, this happens with the apparent constant threat Louise is under. For readers who tend not to dissect the logic of a story, I am confident you will be delighted with this one.

Bottomline: Dead Dead Girls is for you if you like dynamic amateur sleuths and the under explored time of 1920s Harlem.

Colin Conway has just released the newest anthology of his 509 universe, Back Road Bobby and his Friends. I am thrilled to have written a story for this collection titled Giddy Up Done Gone. My story is about something everyone wants but noone can buy: respect. Giddy Up is eighteen and grew up in her grandparents loving home. With her grandsparents now deceased, her family had very modest expectations for her life. In a family of mechanics and car junkies, being female kept her out of the pits. I suppose this is a coming-of-age story, but it didn’t feel like it when I was writing. It has the hallmarks of a TG Wolff story-strong characters, humor, and a healthy dose of rule breaking. Check out all the wide and varying stories in this newest edition to the 509 universe.